About the Author: Forever Frida: A Celebration of the Life, Art, Loves, Words, and Style of Frida Kahlo 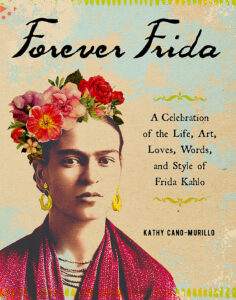 Authoring a book appears to be glamorous and magical, but in reality, it’s an emotionally grueling process. I’m proud to have penned nine titles in my career, especially when they were released year after year. But something shifted after my last two books. After writing seven crafting books, I made a risky leap into the world of fiction. I devoted six years to writing two novels, Waking Up in the Land of Glitter, followed by Miss Scarlet’s School of Patternless Sewing, both published by Grand Central Publishing.

After all the late nights of rewrites, crying over the book cover designs, the anticipation of the release – I thought for sure my persona would transform into a flashy bestselling novelist. I even visualized it! But life doesn’t always play out the way we imagine. For the next several years, the only page-turner I encountered were rejection letters for my book pitches. I refused to give up. In between book proposals and manuscripts, I used all kinds of manifestation techniques on my annual vision boards, my passwords, even sticky notes on my bathroom mirror. I vowed to have a 10th book, no matter what. After yet another rejection letter in 2018, I decided to give it a rest. I concluded I would be proud of my nine books, I mean that is quite an accomplishment! I released the pressure and removed all traces of manifesting anything with publishing. I made my peace with defeat.

However, I never stopped writing. Writing and storytelling have always been at the core of who I am. Letting go of the book deal idea freed up space in my spirit and schedule to focus on my other passions, such as blogging, creating art and sharing craft tutorials and – The Phoenix Fridas, a Latina art co

llective I founded 14 years ago. Comprised of 10 women, we each are inspired by Frida Kahlo for a different reason. Since discovering the world of Frida in the early 90s, I’ve always admired her passion and perseverance for living and expressing her truth. For the past decade, The Phoenix Fridas host an epic birthday bash in her honor. Hundreds of families show up to celebrate. We talk about her work, her life, her controversies, and her struggles.

I clearly remember our event in 2018. As the event planner, I hustled through the crowd that sweaty July afternoon to direct as needed. On a whim, I pulled out my phone to check my messages. I stopped and gasped. There on my screen was a message. An editor from Adams Media of Simon and Schuster. She asked if I would be interested in authoring a book about Frida Kahlo.

I didn’t even read the rest of the paragraph before replying, “Yes!”

Fast forward a year. I was delighted to announce my tenth book finally came to be – Forever Frida: A Celebration of the Life, Art, Loves, Words, and Style of Frida Kahlo. Think of it as a fangirl’s guide to Frida. There are 160 pages and you can open any one of them to discover artful inspiration.

My goal was to come up with lesser-known facts and anecdotes about her and at the same time honoring her legacy. I wanted her to be proud! The way this manuscript came together so effortlessly makes me think Frida approves.

My takeaway for all of you is sometimes when we yearn and push for a goal so hard, we can actually push it away. Like trying to catch a butterfly. It’s good to let go and trust. Trust in your past efforts. Trust in your willpower. Trust in what is meant to be. And when you least expect, that butterfly will come land on your shoulder. 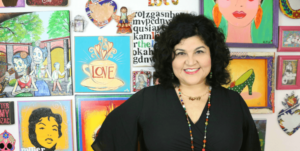 Kathy Cano-Murillo is an author, artist &amp; founder of the award-winning brand, CraftyChica. A former syndicated columnist for The Arizona Republic, she is now a full-time creativepreneur which has led to multiple Crafty Chica mass retail product lines, and collabs with Coca-Cola, HSN, HP, WordPress, Disney &amp; many others. She has authored seven craft books, two novels, and recently, Forever Frida: A Celebration of the Life, Art, Loves, Words, and Style of Frida Kahlo. She has been featured in The New York Times, USA Today, Huffington Post, Buzzfeed+ more. Kathy is Mexican-American, a native Phoenician, mom of two, a wife, and owner of three Chihuahuas.