About the Author: Inspiring the Artemis Generation

We live in a new era of space exploration and discovery in an ever-changing world. This is the Artemis Generation, in which the possibilities of what we create and where we go are infinite— just like our Universe. Jobs and industries are being disrupted and replaced by technology, robotics, artificial intelligence (AI), and other scientific developments. According to the World Economic Forum, 65 percent of children will end up working in jobs that don’t even exist yet. Additionally, STEM (Science, Technology, Engineering and Math) jobs are growing at a faster pace than non-STEM jobs. 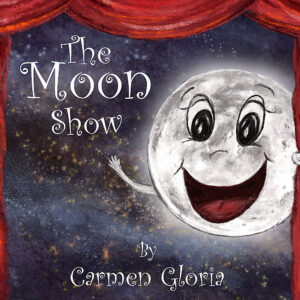 With the Artemis (Moon to Mars) program, NASA will land the first woman and next man on the Moon, with plans to explore the Moon and beyond with commercial and international partners. Eventually, what is learned at the Moon will pave the way for human exploration of Mars. Many technologies we use today, such as our cell phone cameras, CAT scans, water purification systems, and even laptops, are available because of space travel.

When I started thinking about writing and illustrating children’s books, my urge was to inspire kids to learn about space in a fun and positive way, to want to be a part of a great future, and to expand their curiosity. With my most recent book The Moon Show, our Moon introduces other moons from our solar system, incorporating a few empowering messages. There are about 170 moons in our solar system and The Moon Show is the first book to ever showcase other moons. Perhaps it will be on a moon and not a planet that we find alien life someday, as some of these moons have elements necessary for life.

I have received emails from parents saying how much they’ve learned about astronomy while reading these books to their children, and that means a lot to me. The very first book in the series, Thank You Mercury! was included in the Summer of Space program at the Space Science Institute. I was also told that their space plasma physicists (“space weather folks”) were so happy someone made a book about their content area! The book went on to be included in the “Best Space Books of 2019” list by Book Authority. I am excited to be launching all three books of the series in Spanish early next year. One of my missions is to encourage kids to believe in something bigger than just their immediate surroundings, creating a hunger for knowledge and a desire to be a part of our future in space. Who knows? Some of these kids could end up solving the environmental crisis and curing diseases.

Humans are naturally curious, and ours is not the first period of accelerated scientific exploration. In the earlier Age of Discovery—from the 15th to the 17th centuries—we ventured off into the unknown, even when many thought it was impossible and believed the world was flat. Explorers dared anyway, discovering and mapping the Earth we live on today. This new age of space exploration will expand our knowledge beyond our planet, our solar system, and our galaxy. Coming advances may even provide answers to the ultimate human question: “Why and how are we here?”

Carmen Gloria Pérez is a U.S. Army Veteran, served six years active duty, and is a children’s book author and illustrator of books on astronomy. “The Moon Show” is the third book in her Kid Astronomy series. The previous two books of the series have received some great reviews, and the debut book, Thank You Mercury! made the Best New Space Books 2019 list by Book Authority. For more information visit http://www.carmengloria.net.