About the Author: Latinas in Aviation 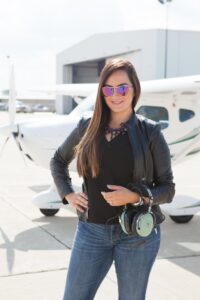 When it comes to aviation, I say that it has become the true testament of my dedication to my dreams, and therefore the elevation of other dreams in the community. Being a licensed sports pilot has truly allowed me to spread my wings in uplifting and elevating Latinas. While exploring these possibilities, I often wondered if other Latinas like me who are recreational or professional pilots in the aviation or even the aerospace industries.

As I was researching Latinas in the aviation industry for my new book “Latinas in Aviation,” I came across a startling statistic. According to the International Society of Women Airline Pilots’ July 2020 Worldwide Female Airline Pilot Numbers by Region report, the total percentage of female pilots in the United States is only 5.27 percent. Within this group, Latinas are most likely in the minority. I wanted to find who some of these amazing women were and how they made their mark in these fields. Their stories needed to be told and, most importantly, to show younger generations that they have an interest in aviation and aerospace, they should pursue those careers.

The search was on and my book team found 21 dynamic, fearless Latinas—veterans, new graduates, pilots as well as aviation administrators, military and civilians—who could share their personal stories, achievements, struggles, and challenges. Among them are Graciela Tiscareño, U.S. Air Force Veteran/CEO of Gracefully Global Group, LLC; Olga Custodio, retired USAFR Lieutenant Colonel and American Airlines captain and Evelyn Miralles, the former chief principal engineer for the Virtual Reality Laboratory, an astronaut training facility at NASA Johnson Space Center in Houston. She contributed to the book’s preface.

Despite COVID-19, Fig Factor Media Publishing, my book publishing firm, was able to host a summer soft launch with three of the authors and taking guests on short flights at Bolingbrook’s Clow International Airport in Bolingbrook, Illinois. 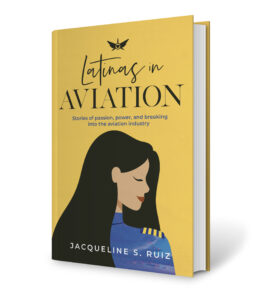 Knowing me, I didn’t want to stop with these stories since many young Latinas are waiting in the wings to develop their paths and careers. All of the proceeds of book sales will go to create the #Pilotina scholarship to help these women who have dreams of entering the aviation and aerospace industry.

When writing this book, I reflected on my journey into aviation. It began simply enough when seeing a little plane at a hot air balloon show in 2014. My husband Juan Pablo and I took a discovery flight. Other experiences with flight lead me to develop a personal commitment to becoming a licensed sports pilot that entailed many private lessons, sleepless nights, and much studying.

After putting in many hours, I received my official license on July 7, 2018. For me, aviation became an important factor to where it kept seeping into my life and the way I looked at life on the ground. I try to find every opportunity to express this amazing passion that I have for aviation and “Latinas in Aviation” was one vehicle to do it.

Jacqueline S. Ruiz is a visionary social entrepreneur that has created an enterprise of inspiration. Her keen sense of service coupled with the vision to bring good to the world has led her to create two successful award-winning companies, two non-profit organizations, published over a dozen books, created many products, and held dozens of events around the world in just the past decade.

She is often referred to as a “dream catcher” as her strategies have supported thousands of women, authors and young ladies to achieve lives of significance. At her young age, she has achieved what most would not do in an entire lifetime. Being a cancer survivor sparked a sense of urgency to serve and transcend.

Born in Mexico City, Jacqueline S. Ruiz moved to the United States at age 14 where she learned English and German shortly after. She launched her award-winning marketing and public relations agency JJR Marketing in 2006.

For information about Jacqueline, visit http://jackiecamacho.com/.