Since its inception in 2018, the American Airlines Cadet Academy has been helping ensure there are efficient and accessible pathways into the professional pilot career path. American Airlines’ first-of-its-kind program, designed to help future aviators receive training, funding, and mentoring they need to fly for the world’s largest airline, aims to expand the pilot population and remove barriers for students while increasing diversity amongst the future and current pilot ranks. Those who successfully complete the program have an opportunity to become first officers at one of American’s three wholly-owned regional carriers and eventually fly larger aircraft at American. To date, 500 cadets have entered the program, with 50 percent coming from diverse backgrounds.

“We’re working hard to increase diversity within the professional pilot career,” shares Claire Webb, Pilot Recruiting & Development at American Airlines. “By packaging together mentorship, more accessible financing, and some of the most knowledgeable flight schools in the country, the American Airlines Cadet Academy continues to increase awareness of the career opportunities in aviation and increase accessibility to the pilot career path for anyone with a passion for flight.”

According to Webb, it takes approximately three years to complete all the necessary training and experience-building needed to become a professional pilot. At that point, most pilots join a regional airline to build flight time and professional experience. American Airlines has three regional wholly-owned airlines — Envoy, PSA and Piedmont which are closely linked to the program, and currently has approximately 50 cadets flying around the U.S. for regional carriers. Once pilots build their professional resume, they will be ready to fly for American.

Meet three Latinas, Daisy Soto, Fabiola Sanchez, and Nathalie E. Pauwels, who have participated in the American Airlines Cadet Academy, and share their experiences in aviation with us. 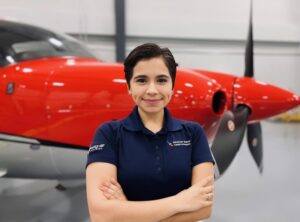 “I always had a dream of becoming a pilot since I was a kid,” shares 25-year-old Daisy Soto. Originally from Tecate, Mexico, Soto overcame many obstacles to achieve her dream. Soto’s challenge with this goal was the lack of programs in her hometown to assist her in achieving it. She then decided to seek opportunities in education that would allow her to follow through on her career path. “I didn’t see any female pilots or flight schools in Tecate, so I decided that I needed either to go to Tijuana or go to the U.S. where I would have to learn English, which is what I did,” Soto says. “In order for me to learn English, I had to commute every day from Tecate to the U.S., and that included waking up at 3:00 or 4:00 a.m. to get to the border on time.”

At almost 16 years old, she decided to finish high school in San Diego, CA, which brought about a rigorous daily commute from across the border into California. Upon graduating from high school in 2014, Soto enrolled at Cuyamaca College in San Diego, completing an Associate’s Degree in Business Administration. After completing her degree, she decided to pursue aviation, but had to find a way to pay for her tuition to attend flight school. After being denied loans due to her status, she applied for U.S. citizenship and became a citizen in 2018, opening many more opportunities.

In January 2020, Soto discovered the American Airlines Cadet Program while searching for

ways to pay for her flight training. During her application process, she was involved in a car accident which left her unable to walk for three months. Despite this, she recovered and in April 2020 she was accepted into the cadet program and enrolled in Coast Flight Training in San Diego, where she finished her program in December 2021.

“This made me so happy because I always wanted to be a pilot for AA,” she states. “The AA cadet program changed my life. I’ve met amazing people who helped me succeed. I got my private, commercial, multi-engine, and instructor license in the program, and learned ground instruction as well.”

Soto’s parents at one time were skeptical of the career path she chose, but are now proud of their daughter as she has worked hard to complete her education and overcome the adversities faced along the way. Currently a flight instructor at Northwest Flight Service in Spokane, WA, Soto plans to complete her flight instructor hours and become a captain with American Airlines.

“I had to start from zero when I was in San Diego and overcome the language barrier,” she shares. “Another goal of mine is also to inspire other girls to achieve and follow their dreams.”

Before starting her career in aviation, Fabiola Sanchez worked as an associate producer at a news station. Sanchez, who is of Honduran heritage, switched careers by becoming a flight attendant with American Airlines in 2014.

“At the time, I saw that American Airlines was hiring and thought it would be really cool to be a flight attendant, and to travel and see the world,” she shares. “It seemed like an exciting and fun career to have.”

When reflecting upon her experience as a flight attendant, Sanchez says, “I really enjoyed my experience, but what made me more curious about becoming a pilot was the interactions that I would have with the other pilots during breaks.”

Her curiosity eventually prompted her to apply for the American Airlines Cadet Academy in 2018.

“The program was newly created at the time, and it was advertised to the employees on the website,” she says. Thanks to the program, she was able to find a school, receive a loan, and get fast-paced training that allowed her to accomplish her goals in nine months.

Sanchez had been encouraged to apply for the program by a fellow friend and flight attendant and officially enrolled in September of 2018. She attended the program in Pompano at American Flyers, which is north of Miami. During the program, she received her certifications at a faster pace due to the program’s

After receiving her licenses, Sanchez became a flight instructor through the Envoy Cadet Program and became a first officer with Envoy Airlines after completing her 1500 hours of flight time. Sanchez is also involved in a few different programs such as the “Ninety-Nines, Inc,” founded by Amelia Earhart.

“I like this organization a lot because it has that sense of community and resource, and the idea is to promote aviation to women,” shares Sanchez who is currently on maternity leave.

Sanchez is proud to be a pilot in the airline industry where only five percent are women and even fewer are minorities. Today the aspiring captain believes the academy program was crucial in getting her to where she is in her career. “It would have taken me longer had I done it on my own,” she shares.“We had a great support system in the program.”

Nathalie E. Pauwels’s education and work have given her dynamic life experiences as she has a background in both the Navy and as a flight instructor. She graduated from the United States Naval Academy with a Bachelor of Science in English and a minor in French in 2014. Her college experience was unique in that she participated in military-style activities while taking courses in English, Science, and Mathematics. During her senior year in college, she decided to pursue the subject of “Intelligence” as her service selection, which prepared her for her future position with the Navy as an officer. Pauwels attended “Intelligence” training school after college. She was commissioned as a Naval Intelligence Officer in May 2014, and has deployed to Greece, Japan, and South America.

“As a Naval Intelligence Officer, the job is to support those that are in more traditional warfighting roles by providing them with threat and geopolitical analysis,” she shares. “We help frame the decision-making process in a variety of ways.”

In September 2019, Pauwels enrolled in the American Airlines Cadet Academy program and joined the reserves during this time as well. She received her private and commercial pilot ratings, with instrument and multi-engine add-ons, in addition to her Certificated Flight Instructor (CFI, CFI-Instrument) certificates.

“The academy taught us to be flexible,” she shares about her experience. “The program was fairly new when I joined. It is designed to help people that have zero hours of flight experience and aviation knowledge and take them through their instructor ratings and licenses with the intent of eventually making it to a major airline.”

Today, Pauwels is grateful for her experience in the program as it has taught her the skills needed to further her career as a pilot.

“I had a great time,” she shares. “It was a unique experience and challenged a lot of my weaknesses and character.”

Currently, she is back with the Navy as the collection manager for US Fourth Fleet/Naval Forces South, specializing in managing various Intelligence, Surveillance, and Reconnaissance (ISR) missions and supporting collection efforts across multiple spheres of influence in Latin America in Mayport, Florida. She credits her Argentinian heritage and Spanish-speaking background as being useful in her current position as she can engage thoroughly with Latin American nations. She is also a part-time flight instructor at the Jacksonville Navy Flying Club building flight hours.

There are a lot of myths about becoming a pilot!” Webb shares. “The reality is, if someone has a passion for aviation and are highly motivated, then it’s a career anyone can consider. Anyone interested in becoming a pilot should take an introductory flight at a local flight school to see what flight lessons are like. If the introductory flight ignites an interest, then visit: http://www.AACadetAcademy.com for more information.