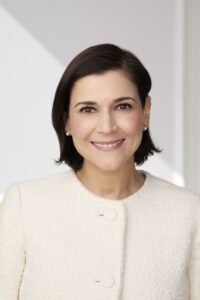 Carolina Jannicelli was born in Nicaragua but her family was forced to flee during the civil war and resettled in Costa Rica. Her parents were small business owners and had to rebuild their business which inspired Jannicelli – the oldest of four children – to get a quality education, work hard and create opportunities for herself. Today, she is Managing Director and Head of Community Impact at JPMorgan Chase & Co.

In this role, Jannicelli leads a team that governs the firmwide strategy and implementation of the $30 billion racial equity commitment by JPMorgan Chase to close the racial wealth gap. She collaborates with all lines of business and corporate functions, including Diversity, Equity, and Inclusion (DEI) and Corporate Responsibility, as well as city-level leadership teams, to bring together the firm’s business, philanthropy and policy efforts that drive inclusive economic growth.

Through her career, she became a banking insider – which, coupled with her personal journey as an immigrant child who overcame economic obstacles with her family in Central America – has informed her profound understanding of the challenges faced by communities of color in the United States.

“My roots are the reason I have worked so hard my whole life and don’t take anything for granted,” Jannicelli shares. “When you come from a poor country, you don’t expect anything. You believe you’ve got to earn anything that you get.”

Education became the key to a prosperous future. Despite her family’s financial situation, Jannicelli attended the prestigious Babson College, paid through the sacrifice of her parents, whose earnings were in Central American currency. Jannicelli thanked them by taking advantage of every opportunity that came her way. She was hired by Chase fresh out of college in 1996. Twenty-six years later, she is proud to still call JPMorgan Chase & Co. the place where she works and has built a fruitful career.

“For me, it really was a discovery, how money moves in the world, and the importance of knowing how that worked in order to drive growth,” Jannicelli says. “Growing up in Central America, in an emerging economy, I was really invested in doing work that could ultimately help bring capital to countries like mine, and Latin American companies so that they could grow and create jobs and develop the local economies. And that is really what got me excited about Wall Street.”

She began her career in investment banking, covering Latin American companies and helping them raise money by issuing bonds and completing mergers and acquisitions. She spent time in Mergers and Acquisitions, in Debt Capital Markets, and covered the energy sector for Latin America.

By working in finance and banking at a prosperous company, Jannicelli was able to become financially secure.

“I felt very connected to my roots and immigrant community, so it was always my understanding that I had a role to play in helping other Latina women who I also knew would make the same out of every little morsel of opportunity they got because we had a shared experience,” she says.

Today, Jannicelli has harnessed her experience in her Community Impact role, helping businesses across JPMorgan Chase integrate a racial equity lens into everything they do, and do so in a sustainable way. She also works with her team to engage community partners and external audiences in ways to support racial equity and financial inclusion beyond the walls of the firm, locally and in communities that need support.

From the start of her career, Jannicelli has proudly been involved with Adelante, the Latino Business Resource Group (BRG) within Chase, and local nonprofits that support social justice causes. She says she feels a duty to serve these organizations because she knows what it is like to want a shot and wait for your chance at the shot.

“I know that intuitively about my people. I just know that’s what we do,” she adds. “So, whether it was training the interns, mentoring Latinos who joined the firm, and as I become more senior, providing coaching and career guidance to more senior Latinos who were just a little stuck in their career and didn’t know what to do or were just struggling with building relationships with senior leaders who were different than they were, I was eager to lend a hand.”

But Jannicelli quickly learned that the banking industry was dominated by white men, so she knew that to climb up the ranks she had to build relationships with people who were different from her.

“I was very focused on getting to know this person across the table and finding common human connections that could open up a conversation, that could eventually lead you to a professional relationship that could be collaborative and build trust and credibility and continue to grow,” she explains.

In addition to her career at JPMorgan Chase & Co., Jannicelli serves on the Corporate Board of Advisors of UnidosUS, the largest Latino civil rights and advocacy organization in the United States.

She was recently named one of the 500 most influential people in Latin America by Bloomberg Línea and recognized by Crain’s New York Business as Notable Hispanic Leader. In 2021, she was a recipient of the Latina Trailblazer award by LatinoJustice, named among The Top 100 Most Influential Latinas by Latino Leaders magazine, and inducted into ALPFA’s 50 Most Powerful Latinas Hall of Fame. In 2020 she was featured on Crain’s New York inaugural list of Notable Women in Financial Advice.

“JPMorgan Chase & Co. has the business resources, the philanthropic resources and the human capital at a scale that is unmatched by any financial institution and even just broadly,” Jannicelli concludes. “We have the ability to use our tools to do good and to have an impact that is real. That’s the reason why I took this role and am heading Community Impact. I’m convinced we’re going to do good and make a difference.”