College Beat: The Courage to Pursue Your Dreams 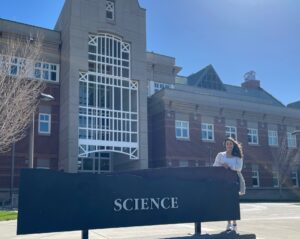 My name is Esmeralda Jacobo, and I am a first-generation college student. I am a Molecular Cell Biology and Psychology double major senior at Central Washington University. I have two brothers, one of whom will shortly graduate from high school and become the family’s second college graduate. Both my parents moved to the United States in their early 20s in hopes of a better life. They come from generations of farmers and agriculture and continued this line of work once in the U.S.

During my senior year of high school in 2014, I applied to every major university in Washington State and was accepted to all of them. However, the cost of attending made a huge impact on my decision, so I decided on a different path. I attended Yakima Valley Community College and graduated with my associate’s degree. During those years. I had to work full-time to pay for school, which affected my grades immensely. There were even quarters where I could only afford to attend part-time, and juggling work and school became exhausting to the point I started to feel burned out. However, I was able to persevere and complete my studies. Despite my difficulties, I told myself not to give up and to keep going.

After graduating with my associate’s in June of 2018, I took the rest of the year off and worked various jobs like tutoring math for Yakima Valley Community College, working part-time as a bank teller, and working part-time as a substitute teacher. During this time, I saved money and continued to pursue my education. I always knew I wanted a career in the medical field but didn’t know exactly what that would be. I eventually fell in love with that particular vocation after shadowing my local optometrist and chose to pursue it. I also decided it was time to further my education and got accepted into Central Washington University, where I am currently completing my bachelor’s degree. This decision was the best fit for me and allowed me to stay close to my family and friends. Being a transfer student also presented its own set of challenges as I took on a full load of courses while transferring within my bank teller job. Once courses and my new position at work started, it became extremely difficult to manage everything. It took months to get used to a new routine, new life, new way of learning, and adjusting to a new normal. 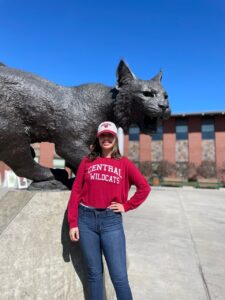 When I first started CWU, I was terrified to do something I was unsure of, but I will never regret my decision as I challenged myself to break my fear because it exposed me to a new way of thinking. Another big challenge was attending school during the pandemic. It made online learning very challenging, especially when it came to labs. However, I have learned so much within my STEM major. So far, it has been difficult being a Latina in STEM because there aren’t many like me in my courses or labs. STEM is a challenging major but rewarding. My career path has prepared me for medical school, which is what I intend to pursue after graduating from CWU. I plan to attend optometry school at Pacific University in Oregon to become the first doctor in my family one day.