By Diana and George Maltez

I was a little four-month pup when I first joined my family. My mom had moved back to Dallas after a year of living in Washington D.C., and my dad had recently retired from the Marines after 10 years of service. They had been together for about a year when they decided they wanted to expand their family. It was my dad that convinced my mom to get me. He was very sneaky and showed her cute photos of puppies. Eventually, she gave in when her brother shared that he was getting a dog and that the breeder had another dog available.

That’s when I came into the picture. My parents went back and forth on my name but eventually ended up with Luna. So that’s my name. I am a German Shepherd mix with a dark black coat. We lived in the heart of Dallas near the airport. Everything was new to me: the noises, the train, the cars, the smells. As a pup, I was afraid of the big city after being raised on a farm for the first few months. So, it was a big adjustment for me as I had to get accustomed to potty breaks and a feeding schedule; at least I didn’t have to share my food with my siblings anymore. I had the bowl all to myself.

My dad became my ultimate protector and guided me in everything. When I first came home he slept near me to make sure I wasn’t afraid. Needless to say, my dad and I quickly became best friends. We went everywhere together, from restaurants to the park. My parents then decided to move to Fort Worth to be closer to my mom’s family.  Fort Worth was a nice change from the big city noise. What I love most about where we live now is the trail near our home. My dad and I love walking and running on the trail. After he trained me for a few months, I was able to run around without a leash. Things were going great until it was my first birthday. That is when I started to notice that my mom was looking different. She started to have a little ball on her belly, which kept growing. I became very protective of my mom, and I would often kiss her belly and also hide under it. 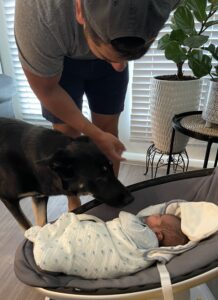 Soon I knew my life would completely change. On June 24th, my mom and dad abruptly left early in the morning. My dad returned a couple of hours later and dropped me off across the street at a boarding place called the Paw Pad. I knew my little brother was coming, I could sense my dad was nervous, so I was calm and even got to give him a good luck kiss before he left. I spent what felt like forever at the Paw Pad, but finally, after three days, my dad returned for me. We all had anticipated my little brother’s arrival, and now he was here. My parents were so happy to introduce him to me, and just like them, I fell in love. I was now a big sister and had big responsibilities to protect my little brother.