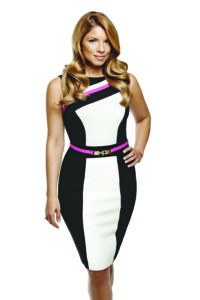 These are just a handful of the identifiers commonly used to describe Gaby Natale who celebrates her Latinidad in everything she does, and in so doing, empowers generations of Latinas to dare to dream and to become what they cannot yet see.

The Argentinian-Italian became the first Latina author to be published by HarperCollins, the second-largest publishing company in the world. She is one of a few women in the entertainment industry who owns both the rights to her TV show, SuperLatina, which airs nationwide on Vme TV, a member of the PBS family, and a television studio. This unique circumstance gave her the opportunity to marry her passion for media with her entrepreneurial spirit.

“Becoming an entrepreneur for me was not a right, but a privilege I had to earn by becoming a U.S. resident first and later a citizen. I spent so much time not legally able to have my own business and I got to be an entrepreneur,” Natale says. “Too many people think it’s a risk to go out on your own but I had to earn the privilege so I was not focused on the risk. My motivation to start creating independent content was having more creative freedom.”

As a journalist, Natale recalls vividly how she would advocate for human stories that were traditionally misrepresented or not usually covered by mainstream media. She said it was heartbreaking to see story after story killed before they ever saw the light of day. Natale recalls how she fought to have her interview with Cuban-born American journalist Cristina Saralegui aired on a small market news station. 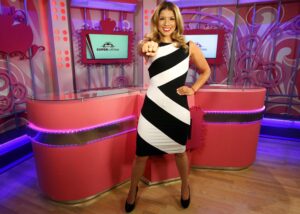 Gaby Natale, whose Spanish-language show SuperLatina has gone from a local Telemundo program to a national audience on Vme TV, celebrates her humble beginnings in the Odessa/Midland area of Texas. Her pink TV studio set bubbles over in shades of pink because she said color is very important to her since she was forced to wear a navy blue school uniform for years in her native Argentina. On Wednesday afternoon, July 09, 2014, Ms. Natale posed for pictures on her TV set and in her Fort Worth, Texas offices. (Mona Reeder/The Dallas Morning News)

“I was fascinated by Cristina Saralegui. She is someone who broke so many barriers for women in the media,” Natale explains. “She discussed domestic violence and immigration and LGBTQ+ rights. At the time, no one in our community was discussing this and I worked in a small market. I worked my butt off to get an interview with her.”

She had to promise to still cover the day’s breaking news stories if she wanted to see the Saralegui story aired.

“I wanted to see Latinas represented in the media with the dignity and respect I believe we deserve,” Natale explains. “We see ourselves represented but many times it’s through stereotypes. That’s why I decided to produce my own content and be intentional about the intellectual property in everything I produce whether it is a keynote speech, a corporate leadership program, a book, or a TV show.” 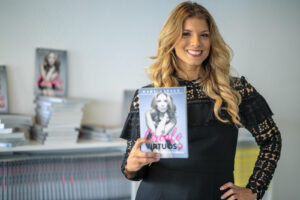 Because her interviews were her intellectual property, Natale was able to use some key interviewees’ insights in her 2021 instant best-selling book, “The Virtuous Circle.” It topped Amazon’s New Releases charts in the Business, Inspiration and Self-Help categories, respectively. Some of the inspirational figures included in her first book are Isabel Allende, Carlos Santana, and Deepak Chopra to learn how they achieved their dreams.

The purpose of the book is to show readers that success is attainable for anyone by channeling their innate strengths and abilities to best work for them. Natale writes about seven archetypes that featured overachievers share in common that trace the path from conception to consummation of a dream.

Natale could easily be featured in her book as she grew up in a small town in Argentina and ultimately went on to win three consecutive Emmys for her nationally-syndicated talk show.

During her book tour, her career came somewhat full-circle, when she returned to Argentina and met her idol, Moria Casán, an Argentine actress and TV personality, who read her book.

“It’s very important for people to understand that we can’t jump to permanent solutions based on temporary circumstances in our lives,” she shares. “We have hits, we have misses, we have good moments, we have bad moments, and sometimes I too have been tempted to give up on (my) dreams prematurely.” In 2021, Natale had just graduated with a master’s degree, but her future seemed grim as the unemployment rate exceeded 20 percent in Argentina and she had witnessed her countryfolk go through five presidents in 10 days. The president fled because of riots and Natale’s own lack of unemployment also brought her personal uncertainty.

Watching Casán work her magic on screen revitalized in Natale her dream of working in the media field.

“In my next life, I want to be like her. I want to work on camera,” she told her then-boyfriend and current husband, Andy. He encouraged her to try for her dream in this lifetime.

“I was 24 years old at the time and this close to giving up a dream that I proved was within my reach,” she says. “You’ve got to believe in yourself and believe in your vision even before you have the results to validate it. Sometimes we wait so much to have the results that we don’t execute and we have to start executing, especially as women. Men are promoted on potential and women are promoted on proof. We’ve got to be more audacious.”

Natale is also the founder of AGANARmedia, a marketing company focused on Latino audiences that serves Fortune 500 companies such as Amazon, Sprint, AT&T, eBay and Hilton Worldwide. In 2019, she launched Welcome All Beauty, her own hairpiece and extension line for women who need to be camera-ready on the go. Over her career, Natale has amassed more than 52 million views on YouTube and over 250,000 followers on social media.

She says her endeavors all focus on empowering women and maximizing one’s current resources to reach one’s full potential. She began filming “SuperLatina” out of a carpet warehouse in Odessa, Texas, and eventually made it to the Hollywood red carpet because she made the most of her resources, skills and circumstances.

Her experiences, such as mastering the English language and attaining her green card and eventual U.S. citizenship, culminated in Natale becoming a sought-after bilingual speaker and frequent collaborator with nonprofits like St. Jude Children’s Research Hospital, Phenomenal Women Action Campaign and Voto Latino. She has served as keynote speaker for a wide array of conferences including the United Nations, tech shows and trade gatherings across the U.S. and Latin America.

“Everything I do is based on the fact that I am Latina. I never hide it,” Natale shares. “I spoke in Nebraska recently and I started my keynote speech the way I always do: ‘Hola.’ Whether it’s the Daytime Emmys or a keynote speech, that’s what comes natural to me because that’s who I am and what’s comfortable to me.”

“I have incorporated it as a journalist, as an author, as a speaker, and also as an entrepreneur,” she adds. “My Latinidad is something I’m very proud of.” Natale is the recipient of the National Association of Latino Independent Producers’ Digital Trailblazer Award and of a GLAAD Media Award nomination for her portrayal of Latino LGBTQ youth in media. She has triple citizenship from the U.S., Argentina and Italy and has resided in London, Mexico, Washington, D.C., and Buenos Aires. She has a master’s degree from Columbia University and taught communication and journalism courses at the University of Texas before starting her TV career. “I’m Latinas’ no. 1 fan. I want to cheer on Latinas doing interesting things. I’ve never had my heritage be a carga (burden),” she explains. “I know some people grew up in households where they were encouraged not to speak ­Spanish, but it was not my case. I’m very proud of my Latina identity and heritage.”