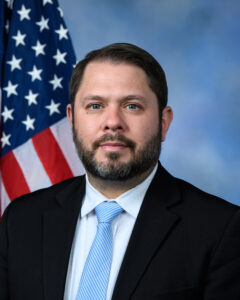 For as long as our country has existed, Latinos and Latinas have risen to the call of service to defend our nation. During World War II, the 158th Infantry Regiment, a heavily Latino unit of the Arizona National Guard, was one of the first to see action in the Pacific, and was described by General MacArthur as “one of the greatest fighting combat teams ever deployed.” Today, Hispanic-Americans comprise 18 percent of all active-duty military personnel.

When I joined the Marines, I became part of a brotherhood with people from all walks of life. In Iraq, I sat shoulder-to-shoulder with Marines hailing from all corners of our country, representing so many different racial, cultural, ethnic, and religious backgrounds. Our diversity made us stronger, and we got through those tough months together.

In every military engagement the United States has fought in its history, the presence of Latino and Latina servicemembers has only contributed to a more cohesive, more lethal military force. Latinos and Latinas in the military are right now deployed in 120 countries around the world. Latino and Latina National Guard members assist with operations in which bilingualism is a strong asset, including responding to natural disasters in California, Texas, Florida, and Puerto Rico, and providing assistance to anti-drug operations in Columbia and other South American countries.

Today, I see politicians who don’t believe that there is any value in the diversity of our military. They dismiss racism and extremism in the ranks and decry “wokeness” as the real issue with the U.S. military.

They could not be more wrong. A diverse force is one better prepared to serve a diverse country, better organized to solve complicated emerging issues, and better equipped to face challenges anywhere in the globe.

Instead, our focus should be on ways the U.S. military can embrace diversity, and work harder to increase opportunities for Latino and Latina servicemembers.

That’s why I was proud when Congress finally took a first step in the stand against white supremacy in the military by moving to rename military installations named after Confederate military leaders. Our military bases should have never been named after traitors to our country, and I’m particularly proud that Fort Hood in Texas will be renamed Fort Cavazos, after General Richard E. Cavazos, the first Mexican-American to reach the rank of 4 star General. That’s the message we should be sending to members of our military—that servicemembers of all backgrounds can reach great heights, not that traitors and white supremacists deserve to be revered.

And it’s also why I introduced legislation to allow DACA recipients to serve in our military. Immigrants from all corners of the world can join the U.S. military, and that opportunity should be open to Dreamers as well.

And for the Latinos and Latinas currently serving, DoD must work harder to increase educational access and opportunities for growth. Though 18 percent of the military is Latino, the officer corps is only 8 percent Latino. That disparity must be addressed, and I will keep pushing for the diversity of our military’s leadership to reflect that of the rank-and-file.

Congressman Ruben Gallego represents the 7th District of Arizona, including parts of Phoenix, Glendale, and Tolleson, in the U.S. House of Representatives. He was first elected in 2014. Representative Gallego is a Marine Corps combat veteran, a lifelong community leader, and the son of Hispanic immigrants. He was the first in his family to attend college, graduating from Harvard University.