His View: Elevating Our Leaders

I am a firm believer in the power of diverse leadership and potential in our community, so it’s an honor to serve the Congressional Hispanic Caucus Institute (CHCI) in our mission to develop the next generation of Latino/a/x leaders across all industries. CHCI’s track record of success is owed in large part to the women who led the organization before me. Therefore, I have the dual responsibility of guiding CHCI into its new chapter and filling an immense role.

I have so much respect for my colleagues at CHCI who work daily to increase the diverse leadership pipeline for the nation and over the years have successfully helped develop thousands of engaged CHCI participants into community and industry leaders.

And while we have many CHCI alumni who have ascended to the highest offices and boardrooms across the country, our work continues as disparities in representation and leadership still exist. But I am optimistic because I know firsthand of the tremendous potential for Latinos – and specifically, Latinas – to contribute to our society as leaders.

When I think about the most significant influences in my journey, the examples set by strong women inevitably come to mind – starting with my mother, two older sisters, and wife, as well as several mentors and bosses. I have often been amazed by their strength, humbled by their brilliance, and inspired by their tenacity. The fact simply is that women, and especially Latinas, are some of the most effective and impactful leaders that exist. And yet, their abilities, unfortunately, are sometimes like a hidden superpower. They lead in the workplace and in communities, often with little recognition or support.

On average Latinas in the U.S. are paid 54 cents for every dollar a white, non-Hispanic male makes, losing out on an estimated $1.1 million during the course of their careers. It’s an unacceptable reality that we must collectively work to change.

And yet despite this fact, Latinas persist in rising and are leading. Latinas are choosing to start their own businesses at higher rates than any other demographic. Latino-led businesses in total are the fastest-growing segment of business in the U.S. contributing an outstanding $700 billion to the economy, as part of the overall Latino population’s purchasing power of $1.7 trillion.

When Latinas are championed, compensated fairly, and supported in decision-making roles, communities thrive.

There has never been a more important time than now to ensure Latinas have the resources they need to flourish. From equal opportunities to lead within every industry to equal pay to securing funding to grow their businesses — Latinas can and will do more with more support.

With a population of more than 60 million, there is no lack of leaders in our community, there is a lack of ladders.

I’m proud to work with the outstanding CHCI staff, half of whom are women, and a leadership team that is majority female.

Together we are serving and elevating cohorts of emerging leaders – of whom well over 50 percent have been Latina – not just for the Hispanic community, but for the nation.

CHCI will continue to uplift and champion all Latino/a/x leaders and we invite everyone to engage with us, as a supporter, partner, or program participant. Learn about our events, programs, and opportunities at https://chci.org/. We look forward to building a brighter future for our community and the country with you. 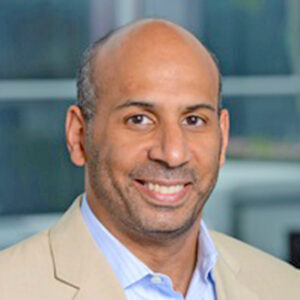 Marco A. Davis is President and CEO of CHCI and has more than 25 years of experience in leadership development, educational achievement, community advocacy, and civic engagement. Prior to joining CHCI he was a partner at New Profit, a national nonprofit venture philanthropy, where he led an initiative now named Inclusive Impact – an effort to create a more equitable social sector, and served as organizational lead on diversity, equity, and inclusion. Davis served in the Obama Administration as Deputy Director of the White House Initiative on Educational Excellence for Hispanics and as Director of Public Engagement for the Corporation for National and Community Service. Previously, he was Director of Global Fellowship and Regional Manager for Latin America at Ashoka’s Youth Venture and led leadership development for UnidosUS (formerly the National Council of La Raza), creating the Líderes Initiative. Davis serves on the boards of Education Leaders of Color (EdLoC) and Independent Sector, and represents CHCI on the boards of the National Hispanic Leadership Agenda (NHLA) and the Hispanic Association on Corporate Responsibility (HACR). He was a Pahara-Aspen Education Fellow and Hispanics in Philanthropy NGen Lideres Fellow, and is a member of Alpha Phi Alpha Fraternity, Inc. and an alumnus of Yale University. A New York native, Davisnow lives in Washington, D.C. with his wife and daughter.