The classical music world, above all else, rewards exceptional talent. When a supremely talented artist has the rare ability to also command the stage through the force of their personal charisma, the stars are in perfect alignment to produce a mega-celebrity.

Such is the case with two Latinas superstars who are currently setting the international opera and symphonic music scene ablaze with their musicianship and visceral appeal. Although both women have their Mexican ancestry in common, their ascension to superstar status has been achieved through remarkably dissimilar circumstances.

New York City-born symphony conductor Alondra de la Parra, for instance, was born into an upper-class family. Her mother Graciela Borja was an academic, and her father Manelick de la Parra, an author. The family moved back to Mexico City when she was a young child where Alondra studied piano and cello at a school for music.

Opera soprano Ailyn Pérez, on the other hand, grew up in a working-class immigrant family in a Chicago suburb, the eldest of three children. Her parents were from two small towns near Guadalajara and her father spent most of his career toiling in a candy factory. Two uncles who had migrated to California marched with civil rights advocate César Chávez. Ailyn’s early music training was provided by public schools.

What both Latinas share, however, is a passion for music that reflects their Mexican heritage. De la Parra’s initial fame stems from her collaboration in 2003 with the Mexican Consulate in New York City to establish an ensemble to perform the music of Mexican classical composers. That led to her establish several years later of the Philharmonic Orchestra of the Americas. The release in 2010 of a critically-acclaimed recording, Mi Alma Mexicana – My Mexican Soul (Sony Classical) further enhanced De la Parra’s growing reputation.

De la Parra’s career path has been nothing less than spectacular since she conducted the final performance of her Philharmonic Orchestra of the Americas 10 years ago. Since then, she has racked up an impressive list of accomplishments and winning critical acclaim around the globe.

“There’s no doubt that with Alondra de la Parra, classical music has arrived into the XXI Century,” proclaimed France’s Le Monde newspaper after a triumphant appearance on a Parisian concert stage.

Year by year, Alondra has become more in demand as a guest conductor, resulting in performances with over 100 of the world’s most notable symphony orchestras and invitations to serve as the artistic director of symphonies in Mexico and Australia. Recently, she has expanded her career horizon by adding conducting ballet and opera productions to her portfolio.

“A lot has happened since the Philharmonic Orchestra of the Americas gave its last concert a decade ago,” she told LATINA Style. “Mostly, it has been a lot of hard work. I’ve been studying, growing, learning and working hard on developing my skill as a conductor.”

While there hasn’t been one dramatic breakthrough moment that catapulted her to international fame, a televised concert with France’s Orchestre de Paris that was seen throughout Europe resulted in overnight recognition.

“Yes,” she recalls, “it generated a lot of interest. I’ve also been traveling to Japan for the past six years, developing a profile there, and working a lot in Germany, where I now live.”

Although she began her conducting career as an advocate for Latin American symphonic music, recently she has focused more on European composers of the early 20th Century, among them Mahler, Stravinsky, Bartok and Prokofiev.

“The world of classical music and conducting is very complex,” Alondra explains. “It’s not just one thing that opens the door. It’s word of mouth, It’s your reputation among musicians, It’s audience reaction. It’s many things. And, in my case, being able to do the works of Latin American composers is a plus.”

She cites two young Mexican classical composers, Gabriel Ortiz and Enrico Chapela, as talents she is excited about. Being able to occasionally program Latin American works for her concerts in Europe and the Far East is particularly enjoyable.

“The Latin American repertoire is new and fresh to many of these audiences,” Alondra adds. “It surprises people because they don’t expect our music to be so diverse. The music of Mexico, for instance, is not only what people imagine — the folkloric styles or beautiful tunes and rhythms. What I tried to do with my album Mi Alma Mexicana was to show a really broad scope of what the symphonic music of Mexico is all about.”

Alondra’s accomplishments are as diverse and numerous as the projects she has undertaken. In 2017, she

began a precedent-setting three-year tenure as music director of the Queensland, Australia Symphony. An official cultural ambassador of the homeland, she is the living embodiment of Mexico’s rich artistic heritage wherever she performs. Frequent engagements with opera legend Plácido Domingo have served to further broaden Alondra’s appeal while her role in creating innovative interdisciplinary educational programs for youth in New York and Mexico has led to collaborations with an eclectic group of artists. Among her partners in this endeavor have been such notables as actor Robert Redford, choreographer Christopher Wheeldon, Mexican singer Natalia Lafourcade, Argentine composer and musician Gustavo Santaolalla, and Cuba-born vocal superstar Gloria Estefan.

The journey of a symphony conductor, Alondra notes, is long. “But the professional life of a conductor is also long, because it just gets better over time. One learns and one matures.”

But the conductor also has her eye on something that’s far afield from commanding the world’s elite orchestras with her baton. Of all things, it involves a clown. She has been collaborating with Mexico City-based clown Gabriela Muñoz on a production featuring orchestra and Muñoz’s theatrics.

“Gabriela and I have been working on this project for some time,” Alondra confides. “We’ve written the script together. It’s something new for me because I’m not just conducting – I’m actually creating a whole performance that involves things other than just music.”

“This is music that speaks to me in a way that has an operatic kind of feeling,” Ailyn states, “but it’s a little more poetic, romantic and intimate. There’s rarely a moment in opera to really feel that kind of vibe. That’s what attracted me to revisit the Mexican bolero tradition. And anytime I sing Mexican music,” she adds, “it truly is ‘mi corazón.’ I put my heart and my family’s heritage into it, and it’s as valid any other kind of music.”

Ailyn’s path to opera stardom began when she tried out for a high school musical. “One had to take voice lessons,” she remembers. “Because I had played flute before, I could sight-read the music and because I spoke Spanish, I could read the Italian required to sing a Puccini aria. I loved the music from the beginning; I felt a strong connection.”

She spent four years at Indiana University, studying voice with Martina Arroyo, the first Afro-Puerto Rican to win fame in opera. Arroyo proved to be a strong role model for Ailyn, who has dedicated her Mi corazón recording to the woman who served as her mentor. Then it was four more years at the Academy of Vocal Arts in Philadelphia.

“That’s where I really started to understand what it takes to be an opera singer,” she states. “You have to hunt for an apartment and some church jobs to pay for it, research the role you were preparing for, practice and then perform!”

And perform she has, racking up praised performances with many of the leading opera companies in the U.S. and abroad. The New York Times summed up her appeal in a review, stating,

“She is a beautiful woman who commands the stage” and “is a major soprano.” Raving about her vocal talents, the publication Pizzicato raved, “Her beautiful and generous voice, her commanding technique as well as the broadest possible spectrum of feelings, allow her to make a captivating drama of every piece.”

However, Ailyn recalls that her first engagement in Europe was fraught with doubt about her talent. “It was in Berlin, and it was a production of La Traviata that didn’t have an intermission,” she explains. “After the aria, there was applause, but it was fairly subtle, and I thought I was bombing. So, I focused on trying to make every appearance better. I gave it my all, and still, it resulted in timid applause. I thought, ‘Oh my God – my career is over before it’s even begun!’ 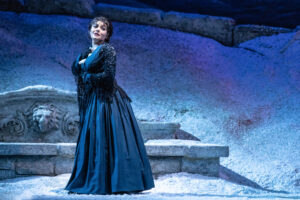 But when the performance was over and the lights came up, it

was shocking. Not only was there strong applause, but it was a standing ovation. And then the ovation turned into this rhythmic stomping. It was wild. So, I hadn’t bombed; I’d had a really great night. I think maybe it turned out to be so great was because I thought I was bombing all night!”