Latina Letters from the Front 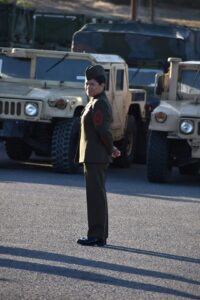 We all have a personal story, but who decides which story is more important than the other. The sacrifice each service member makes to his or her country is personal. Putting those personal thoughts and experiences to paper in an open form is something I never considered. However, as I sit here on a Sunday evening, my personal reflections begin to pour out of me. These are a few observations from my life as a woman Marine to date.

I grew up in Peru. My father was an accountant, and the mother was a stay at home mom. My parents provided me and my younger sister a very stable life. My parents enrolled us into Catholic school where we both learned English and spoke it as a second language. My father first came to the United States in search of a better life for our family. After five years, he was able to send for us to join him in New York which the state I claim now as my home of record.

I felt that I was a good student throughout high school, however the reality was that I was average. I was not offered any college scholarships coming out of high school. My passion was to become an archeologist and travel the world looking for ancient artifacts. Without the financial means to just attend college and pursue studying archeology, I had to come up with a Plan B. I sort my father’s advice on what other options I could pursue. He crushed my dreams by explaining to me that archeologists are not paid well. They rely solely on donations from sponsors. That left me with two hard questions. What do I do now? What is my backup Plan B?

A very close friend from high school was interested in joining the Marine Corps. He explained that it had been his lifelong dream. He quickly stated that I could not handle the rigorous training of becoming a Marine. That got me thinking. Without realizing what he had done, he had personally challenged me. From that moment, this was my new Plan B and I was determined to prove him wrong.

I took the challenge personal and joined the Marine Corps. Following graduation from high school, I was shipped off to Marine Corps boot camp at Parris Island, South Carolina. Boot camp was a serious wake-up call! Other than sporadically running at 4 a.m. with my dad every now and then I didn’t really enjoy any other types of exercises. I was home sick the entire 13 weeks of boot camp. I missed the comforts of hanging out with friends and family, but my pride and stubbornness to complete that dare is what drove me to finish and earn the title of Marine.

The Marine Corps offered me structure and something new. It was a combination of both scary and attractive at the same time. Prior to shipping off to boot camp, I lived with my parents under a strict childhood. My first duty station afforded me the opportunity to break free of my parent’s parental controls, or so I thought.

I progressed through the first few years in the Marine Corps with confidence. This was until I was faced with my first deployment. I was deploying to Iraq in support of Operation Iraqi Freedom. At this point in my career, I had gotten married and had given birth to my first child. Faced with the fact that I had to leave my child who was only 8 months old at the time, to serve my country. Looking back on that moment, I realized that I was not prepared as a young mother to be separated from my child. To this day, I am convinced that I had some form of postpartum, but was never medically diagnosed. Combined with the depression that I experienced, and to the fact that I was gone from him and that Iraq was a hot and crappy place, I was not myself. I struggled to be myself and to keep up with daily appearances as a Marine. That was hard, to internally break apart but present a well-put-together face to the world.

When I returned from that deployment, my mood did not change. I found it hard to cope with life as a wife and mother. But I was smart enough to recognize that I needed help with readjusting. I remember reaching out to my now one-year-old and him screaming in fear, clinging to his dad because he didn’t know who I was. That hurt me to my core. It made me question if I was a bad mother for leaving him. From that point I knew I had to make some changes. I enrolled into college courses, to work hard at becoming a better Marine and mother, and to create a better work / life balance.

As the years passed, my Marine Corps career became more promising. I selected to be an instructor in my military occupation. I was entrusted with teaching, mentoring, and educating younger Marines. It was a rewarding experience to teach young Marines, I enjoyed planting little seeds of knowledge and mentoring them. Looking back on that entire experience, I saw myself as the closest thing to a mother figure for them. I was also fortunate enough to serve aboard a naval vessel on combat cargo duty and cross train with Sailors. I was familiar with serving with Corpsman, but this was different. I had never seen so many Sailors at the same time. I am grateful I was able to serve and work side-by-side with them. I learned so much from that assignment and was able to form many strong friendships that still last a lifetime.

Looking back at my struggles over the years, for the most part they were personal. As a new single mother managing work, school and my children’s schedules were hard. Separating from my children for deployments was difficult. I missed out on important milestones in my children’s lives. These are some of my regrets. The events weigh on me and I often wonder if I am a good enough. I feel that there is a difference between being a provider and being present.

If you ask me today, if I would I change anything? My answer would be a firm no. My career has taken me to many places and I’ve met and formed relationships with different people all around the country. This may sound fake, but the camaraderie I have found is strong. It is an experience unlike some you would find in the civilian world, it does come at a cost, but I wouldn’t change it.