Latinas Leading the Way in Entertainment

From voice actresses to writers, and producers, we are celebrating Latinas in the entertainment world. Here are two Latinas inspiring the next generation in a unique way. 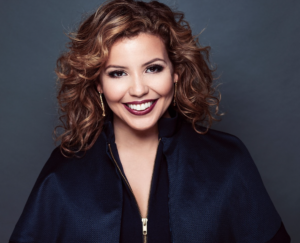 “What attracted me to Zee was that she was fearless and courageous,” shares Justina Machado who voices Zee in “Ice Age: Adventures of Buck Wild.” “She’s a leader, adventurous, courageous, and she’s someone I want on my side and team.”

Machado was very active in drama, always participating in her school plays. She also took dance at Franklin Fine Arts Center. In 1986, Machado attended Lane Technical College Prep High School. During her spare time, she performed with the Latino Chicago Theater Company. In 1990, after graduating from Lane Tech, Machado moved to New York City. The experience which she had gained as a performer with the Latino Chicago Theater Company helped open the doors for her in that city. Soon, she was offered a job as a professional actress in Los Angeles, California. Machado moved to LA, and in 1996, she landed her first two acting roles.

She was cast as Elsa in the TV series “NYPD Blue” episode #311, and she was also cast as “Val Cho” in the movie made for television “No One Would Tell.” Machado has participated in over 15 films. Amongst her most notable roles so far have been Carmen Rodriguez in “She’s So Lovely,” Isabella Hudson in “Final Destination 2,” Agent Henderson in “Torque,” Natalia in “Little Fugitive,” Teresa in “Man Maid,” Sofia in “The Accidental Husband,” Tanya in “The Purge: Anarchy,” and FBI Agent Rosie Gomez in the film “In the Electric Mist.” She was also the first replacement for Andréa Burns in Broadway’s “In the Heights.”

“It shows that you don’t need a superpower, you just need heart, and you can make a difference in this world no matter how small you think you are, you are special and unique,” she shares. “The audience can expect to meet a new character in Zee, and expect to have a lot of wonderful adventures and have a lot of laughs when watching these adventures. I really hope the audience will love her. I really hope that little girls see themselves in her and see that you don’t have to be one thing. You can be strong and vulnerable, and you can be tough and loving. You can do anything; as long as you have courage and heart, anything is possible.” 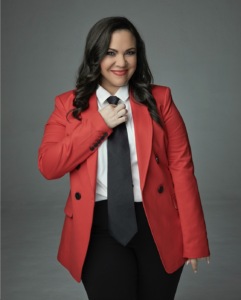 Born in Portland, Oregon, of Cuban descent, Gloria Calderón Kellett is a writer, producer, creator, and actress to emulate. As the sole creator of the newest Netflix show “With Love,” co-creator, executive producer, and co-showrunner of “One Day at a Time,” Calderón Kellett is a leading Latina in the entertainment industry, bringing stories of tradition, love, and more to your screen.

When many were inspired to write books and bring their creative side forward, Calderón Kellett was inspired by the pandemic to write. In doing so, “With Love” was created.

“I was facing a year of not being able to spend the holidays with my family; I missed them,” she shares. “That coupled with the trauma I was seeing on my Instagram feed lead me to a place where I really wanted to make something that celebrated the Latine community.”

Calderón Kellett believes there is a purpose for her work. “With Love” is a show about love, thriving, and Latina business owners living their version of the American dream.

From writing to performing stand-up comedy, Calderón Kellett has worn many hats throughout her acting career. While collaboration is the best part of her work, she admits a few challenges and obstacles throughout her journey have not made it easy.

“I think being a staff writer, in a way, was my most challenging role,” she shares. “Breaking in was very challenging. There is no one way into this job. There is no roadmap, so I had to sort of hustle to figure out ways to break into the industry, and it took time and hard work, but I eventually broke through and that was certainly the most challenging. Once I got in, I felt that I could climb the ladder.”

Inspired by her grandparents who fled an oppressed regime and bravely sought life in a new country, Calderón Kellett feels she is in a position of power enabling her to “send the elevator back down to bring more young people from diverse backgrounds and give them an opportunity,” she shares. “From an artistic standpoint, I am inspired by Shonda Rhimes, Mindy Kaling, and Tina Fey; women who were able to break through the patriarchy and build artistic communities and kingdoms.” 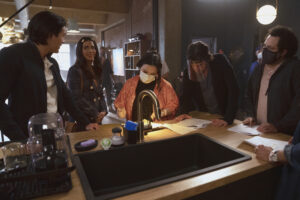 “I want to see Latines in every genre,” she shares. “I want to see my company, Glonation, build into many different aspects of the industry, and eventually have a foundation that helps underserved communities know that there are jobs in this industry aside from just being writers, directors, producers, and actors. There’s a lot of below-the-line jobs that are great jobs, and that are creative jobs. These positions are necessary and vital to have BIPOC people as department heads so we can build a more equitable future not only in front of the camera but behind it as well.”

Calderón Kellett enjoys the opportunities to build a community of like-minded individuals who share the same sentiment and want to use entertainment as a form of culture change. 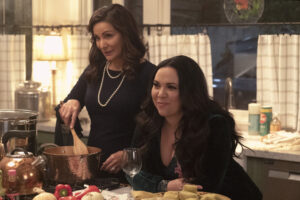 “We are in a moment right now where a bunch of amazing Latine shows have been canceled within the last few years, and that is disturbing to me,” she shares. “I’m hoping that there are more since we are 20 percent of this country. I feel like that should be reflected on the screen so that people can see themselves represented.”

She is currently working on “We Were There Too” with Natasha Rothwell at HBOMax, a classic 80’s coming of age story set in John Hughes’ Chicago.

“In this story, the Brat Pack is in the background,” she shares. “And for the first time, the focus is on the Brown kids, the LGBTQ kids, and the Black kids; the real outsiders, because they were there too.”

Additional works include, “The Horror of Dolores Roach,” a grotesque Sweeney Todd inspired tale of eat or be eaten, survival of the fittest; and hopefully Season 2 of “With Love” which we will find out about in March.

Her advice to aspiring artists is to educate yourself and build a community of like-minded actors.

“Find your community, find your people, work with them, grow with them, share information and keep practicing, and keep getting better,” she shares. “Put on shows and write short films, direct short films, and act in short films. Help one another and climb the ladder together, it’s so much less lonely that way!”