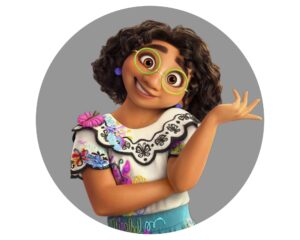 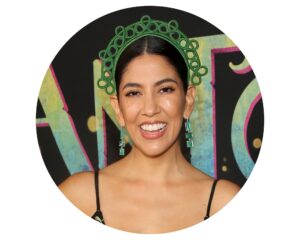 Argentinian native, Stephanie Beatriz, best known for playing Rosa on NBC’s comedy hit show “Brooklyn Nine-Nine,” Carla on “In The Heights,” and, Jessica in the film “Short Term 12,” has catapulted to fame for voicing Mirabel, the heroine in Disney Animation’s smash hit “Encanto.”

Beatriz explains that for Mirabel it “really stinks” to be the only family member without magical powers.

“It can be very difficult to feel special in a family where you look around and everyone has a special gift,” she says. “That sort of is Mirabel’s big dream.”

“For example, Luisa, who was Mirabel’s oldest sister, is really tough and strong. She’s not unlike a lot of older siblings who are the ones handling everything,” she shares.

Then there is Pepa, Mirabel’s cousin, who can determine the weather with a change of mood. She can go from having her community experience a sunny day to surviving a hurricane in one fell swoop.

“We all have somebody in our family that their emotions can suddenly overtake the room and really affect the vibe, often at a holiday function. You can feel that one,” Beatriz explains. “Sometimes those gifts are a blessing and sometimes they’re a curse.” Mirabel often experiences turmoil and uncertainty of who she is and what she can contribute precisely because she lacks one of these gifts.

“I think one of the things that Disney Animation does so, so well is they allow you into the inner life of their heroes and in this film, the inner life of the hero, Mirabel, is one of turmoil and one of uncertainty,” Beatriz says. “She’s really unsure of who she is. She’s not sure whether or not she belongs. But because of her love for her family and the possibility that their magic might disappear, she takes it upon herself to sort of be the hero that she didn’t know she could be.”

Realizing that the fate of her family is more important than her inner fears, Mirabel embarks on a dangerous and thrilling adventure to save her family.

“I think one of the greatest things about this story is that she dares herself to go on that journey,” Beatriz shares. “I think that is so special because it’s telling an audience, many of them very impressionable, young people, that by daring yourself to believe in yourself you could possibly become the hero of your own story.”

Beatriz says it is a gift to have served as part of the Encanto phenomenon, which includes many hit songs like “We Don’t Talk About Bruno.”

“I just can’t get it out of my head,” she exclaims. “That’s what Lin (Manuel-Miranda) can do so, so, so very well. He can write these hooks that just get in there and don’t leave. I love them.”

Beatriz’s standout performance has earned rave reviews and numerous awards, including the 2018 Imagen Award for best supporting actress in a TV series, and a 2015 Screen Actors Guild Award® nomination for outstanding performance by an ensemble in a comedy series.

“Stephanie is perfect,” says co-director Charise Castro Smith. “We couldn’t have cast anybody better. She came to us with Mirabel’s humor, her vulnerability and openheartedness. She brings so much charm to the character.”

According to Beatriz, portraying the character came naturally. “Mirabel reminds me of myself at her age—headstrong yet unsure, full of wonder and imagination but sometimes held back by self-doubt,” says Beatriz. “She’s funny, awkward and brave. She’s also very much a classic Disney heroine, and yet she’s a new iteration of that classic. Plus—the glasses!”

For Beatriz, it’s that in-depth approach that most appealed to her. “Disney has truly perfected the art of storytelling,” she says. “There’s a lot of care and beauty with which they tell these incredible stories—from the research to the story development

to the brilliant animation and collective beautiful energy that goes into making a Disney animated film. It’s a collective of artists working diligently with every ounce of their talent to put something special and beautiful into the world. I’m honored to have been a part of the legacy of Disney Animation. It’s a dream come true.”

Beatriz is next set to host “Twin Flames,” a podcast for Shrink Next Door studio Wondery, about dating and cultish obsession. During her Hollywood tenor, Beatriz has worked to increase the visibility of the Latina queer community. Beatriz has also voiced Gertie in “Ice Age: Collision Course,” and General Sweet Mayhem in “The LEGO Movie 2: The Second Part.” For Disney, she played Salma Espinosa in the “Jessie” episode “Toy Con.” She also voiced Ixlan in “Elena of Avalor,” and Gosalyn Mallard” in the “DuckTales” reboot.

The 4K Ultra HD, Blu-ray, and digital with special features is now available to enjoy.