The Dynamic Soledad O’Brien, Changing the Narrative One Untold Story at a Time 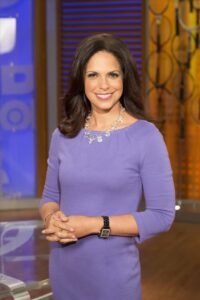 Soledad O’Brien climbed up the media ladder to eventually run her own multi-platform media production company, Starfish Media Group, at a time when Latina journalists rarely got to work in front of the camera — let alone anchor a morning show for a global news network like CNN.

She accomplished this groundbreaking feat with tenacity, integrity, grace and empathy. She became a role model for journalists of color around the country, earning countless awards, including three Emmys, all with a mission to tell the stories about people whose perspectives often fly under the mainstream media radar.

The Afro-Cuban wears many hats as documentarian, journalist, speaker, author and philanthropist. She founded Soledad O’Brien Productions, a multi-platform media production company that tells empowering and authentic stories on a variety of social issues. She anchors and produces “Matter of Fact with Soledad O’Brien,” a Hearst TV political magazine program. O’Brien also hosts the Quake Media podcast “Very Opinionated with Soledad O’Brien” and serves as a correspondent for HBO’s Real Sports With Bryant Gumbel.

“I love sports as a prism, as a window, to look at larger issues. You can tell a lot about a community by looking at sports,” O’Brien says.

She joined HBO’s Real Sports’ Peabody-award-winning team in 2013 and reports regularly for the series, focusing on impactful stories that often are underreported by national media.

Most recent, on March 23rd HBO Real Sports aired O’Brien’s profile on Oksana Masters and her inspiring ability to overcome her traumatic childhood and physical challenges to become a decorated Paralympian. Masters is an eight-time Olympic Paralympic medalist and double amputee who trained for her first Olympic medal while rowing on the Ohio River.

“She’s amazing, funny and had a traumatic and difficult childhood, and then she started getting on the water and started skiing,” she shares. “She’s a phenomenal athlete, woman and role model whose made it through a lot of stuff.”

O’Brien has reported on widespread use of unregulated muscle-building supplements taken by American troops; an inspiring summer camp for blind children; an innovative fight club for war veterans suffering from PTSD; the heroin epidemic among young athletes; a Pinball wizard with autism; the explosive growth of the video gaming industry and much more.

“If there is a story that everyone else is doing, we literally run the other direction,” O’Brien explains. “We get to tell these stories beautifully in 60 minutes. That’s a lifetime on TV.”

She says the idea is to tell the stories of people who wouldn’t get much air time otherwise.

“And let them tell their story. It feels like I’ve been fighting for that my entire career and frankly it was getting pretty exhausting,” O’Brien shares.

Prior to becoming an entrepreneur, O’Brien co-anchored Weekend Today and reported for the Today show and NBC Nightly News. In 2003, she began working at CNN and was the face of CNN’s morning news shows for several years. She anchored the CNN documentary unit where she created the In America documentary series giving the spotlight to various communities of color.

In 2013, she became special correspondent on the Al Jazeera America news program America Tonight along with working as correspondent with HBO’s Real Sports. That same year she formed her own production and distribution company, Starfish Media Group.

O’Brien decided to start her own company after waiting in line, along with 60 other reporters, to cover the killing of JonBenet Ramsey, a six-year-old beauty queen, in her Boulder, Colorado home.

No reporters were able to get close enough to their sources to add anything new or of value to their coverage. She realized the time she was spending covering a story all mainstream media was also reporting on, she could be using to uncover under-reported or new stories entirely.

“I like to go do the things that by being there, I can add value and my voice and being in the mix, it matters that I’m there,” O’Brien says.

She recalls another time working with producer Rose Arce, who is now executive producer of Starfish Media Group, in Haiti. Most reporters were covering the adoption story of 1,200 Haitian children. But the duo knew the bigger story was the children not getting adopted. The ones whose parents were struggling to find a way to keep a roof over their children’s heads and food on the table without being forced to give them up.

“I think the two of us together helped shift that narrative reminding people that while rescuing a plane of kids is a feel-good story, it’s not the prevailing narrative,” O’Brien explains.

Joining HBO’s Real Sports came naturally for O’Brien because the team has committed nearly 30 years to producing investigative pieces and in-depth profiles from the sports spectrum.

O’Brien, who had worked with Gumble as an associate producer in the early 90s, was honored to join his show.

“He was always a very smart guy who required a lot from his correspondents. Do not bring him anything half-assed. To be able to work with someone of that rank and on a series of such high quality, I think is what makes the show great,” O’Brien says.

One of the best things about the show is that it tells human stories through the prism of sports. One can watch it without understanding the rules of any given game in sports.

“We think about life, loss, challenges, humanity, what’s striving for greatness and what’s failing horribly — all through the prism of sports and people who are athletes or people in the sports world,” O’Brien adds.

In keeping with her history of being pregnant during past Olympic Games, she has no plans to cover the upcoming Olympics in Japan either. O’Brien is excitedly working on a CBS project that will look at women in the workplace in the wake of the global pandemic. COVID-19 and its aftermath has especially affected women of color’s employment and O’Brien will be delving into this issue.

Despite the challenges journalism faces currently, she advises aspiring and new journalists to stick it out.

“It’s very easy to be disheartened about the data. Sticking it out can be challenging but finding a passion is amazing,” O’Brien shares. “I’ve had so many great experiences, met so many amazing people and told great stories all because I stuck it out even when it would’ve been much easier to up and quit.”

Included among those experiences was traveling to Cuba — her mom’s motherland — for the first time to cover Pope John Paul II’s historic pilgrimage and meet family.